My love affair with the new Cloud Revolver headphones from HyperX didn’t start off well, mainly due to what I’m calling the ‘Angry Sea Clam’, but we’ll explore that in more detail later on in my full Cloud Revolver Review.

After a serious amount of research and more than a few unboxing videos, I found myself practically drooling at the thought of getting my hands on the HyperX Cloud Revolver Pro Gaming Headset.

I used the Cloud II’s before but, for me, the edgier style and bigger can size of the Cloud Revolver made them much more appealing.

Browsing across to Amazon, I managed to grab myself a pair on sale for £90 ($118 / €107) with free next day delivery. 24 hours later I grabbed the package off the postman like a rabid dog and scuttled back inside to open my package… my precious… my Cloud Revolvers…

Placing the headphones upon my head, I felt the soft cushioning embrace of premium memory foam filled leatherette against my cheeks and immediately opened up my steam account to test these tin cans out.

Around an hour later my love affair with the Cloud Revolver ended. I felt like my head had been clamped by the angriest clam in the sea. The more I wore the headphones, the angrier the clam became and the more my face felt crushed. 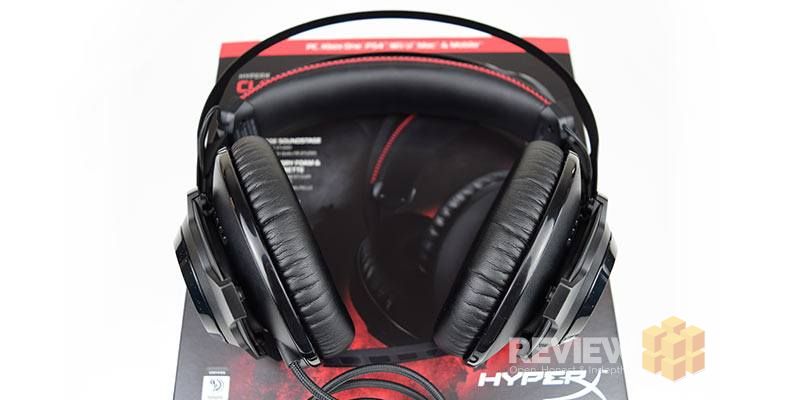 When you first pick up the Cloud Revolvers you get a real sense of the craftsmanship that has gone into making these headphones so great. They aren’t the lightest at 365g but this only adds to the feeling that there are some serious drivers inside, you won’t find any weights in these headphones .

Now, although I prefer the Revolver’s design over the Cloud 2’s, you wouldn’t catch me wearing these outside the house… in the ‘real world’. Everything that makes the design great indoors makes you look like a Star Trek extra outdoors. But that doesn’t matter because there are lots of Bluetooth headphone choices for on the go.

The metal suspension bar that holds these headphones together is, for all intensive purposes, indestructible. One overlooked design flaw by HyperX is that this metal bar acts like a tuning fork if accidentally knocked and when you adjust the headphones sending high pitched ‘Gong’ sound straight to your brain.

Whilst gaming at a computer this isn’t a problem, as you don’t move much, but if you are planning to use the Revolver’s on the go then this will soon become irritating.

An impressive aspect of the Cloud Revolver design is the minimal amount of noise leakage it produces. With the headset on, it creates a firm seal around your ear keeping in most of the noise, even at high volumes.

I like to keep my headphones lying around on my desk when not in use. One unexpected downside to the metal headband design is that it can quite easily scratch your monitor if you’re not careful.

Overall, I’m a big fan of the Cloud Revolver design, the edgier gaming style, to me, feels more contemporary when compared to the Cloud II. With that being said, the noisy metal headband is a design flaw that could have been fixed.

Why am I discussing Comfort before Sound Quality? Because, no matter how great a pair of headphones sound, if my ears feel like they’ve been bitten by the angry sea clam after an hour then they can go straight back to the shop.

Straight out of the box, the Cloud Revolvers feel great, everything you would expect from a full over ear premium set of headphones. But, a big but here, after around an hour of wearing the headset my ears had the pressure burning sensation and the side of my cheek had a strange ache. 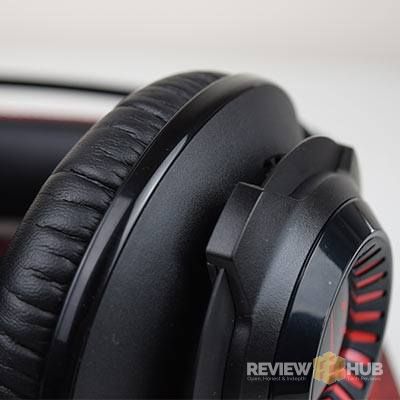 I’m confident that I’m not some giant headed tech blogger which means that others must be feeling the same way about the overly tight non-adjustable Cloud Revolver as me.

The way the Cloud Revolvers exert pressure means that the bulk of the clamping force ends up on the lower half of the headphone ear cup which lands squarely on your jaw. I think the positive reviews about how comfy these headphones are must have come from either people with very small heads who didn’t wear the Revolver’s for more than 5 minutes… well I hope so, or I’ll have to admit that I have a freakishly wide head.

Fear not though fellow tech enthusiasts… through bravery and various stretching methods I have developed a very scientific way of adjusting the Hyper X Cloud Revolver Headband!

Disclaimer: Be careful when trying step 3 as you may overstretch the bar. 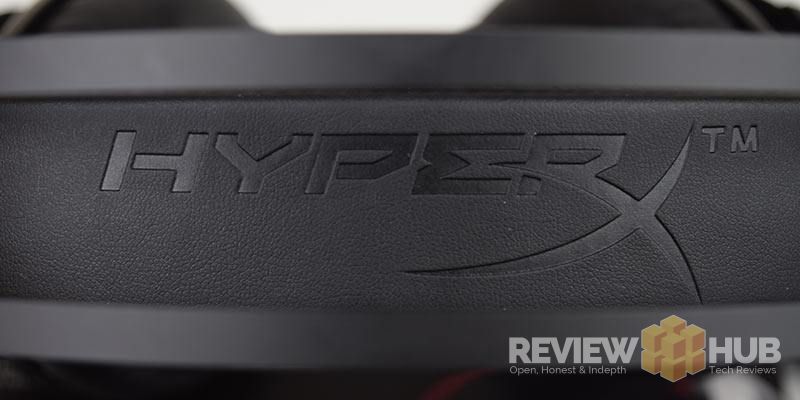 First of all, you will need a 200ml Graduated Cylinder, a Bunsen Burner, and a Gauze mat. Just kidding!

Firstly, I tried stretching the headphones over its box and leaving for 24 hours. The headphones just sprang back to their original shape and the indestructible headband laughed at me.

Secondly, I tried heating the bar with a hair-dryer until too hot to touch and then leaving them stretched over the box until cool. This did nothing. The indestructible headband laughed at me even harder.

My third attempt was more drastic. Placing the headphones upside down over my knee, I pulled the headphones downwards until the headband became straight, then slightly curved the opposite way. Extreme I know. But this method worked with the gap between the two ear muffs showing a visible increase. I tried the headphones on and repeated the process until the pressure on my head felt just right.

Now that I’ve adjusted the headband tension, these are some of the comfiest headphones I’ve owned. Fully covering my big ears and gently resting on my cheeks and head.

I’m planning on using the Cloud Revolver’s as a main headset for some time to come, so getting the comfort just right was absolutely worth it. Now onto the Sound Quality. 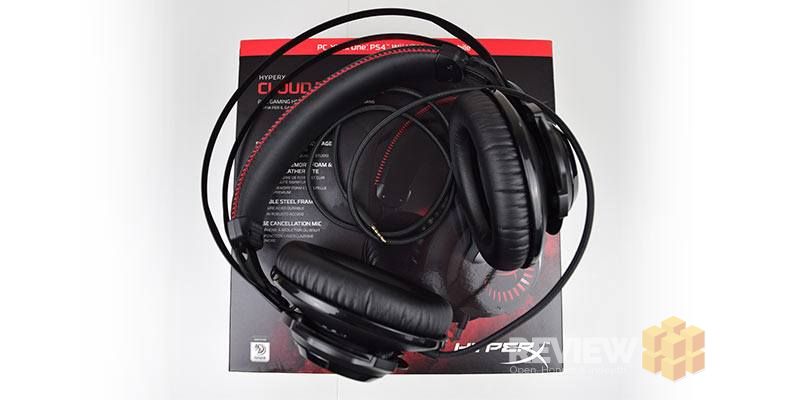 Overall the HyperX Cloud Revolver’s sound fantastic. If you’ve ever tried the Cloud II headset on then you know that HyperX create high-quality value packed headsets with the Cloud Revolver being no different.

To test the headphones, I using a variety of high-quality FLAC music, lots of FPS gaming and a selection and high-quality film trailers.

Straight out of the box, the Revolvers produce a really clean soundstage. You can distinguish between each instrument clearly which, at first, is a little distracting but soon you appreciate the clarity. I was also surprised at how well these headphones performed when listening to music.

One area where the Cloud Revolvers won’t ‘wow’ you straight away is in the bass department. The unequalised bass sounds earthy and guttural but is, in my opinion, still a little lacking. This isn’t an issue though as this can be tailored with through the EQ. For gaming, I used the free Virtual 7.1 software from Razer which really bumped up the bass.

If you haven’t already then go get yourself a free copy of the Razer 7.1 software. It massively improves the Cloud Revolver’s overall sound making games feel epic.

Make sure to turn the Razer 7.1 off when listening to certain genres of music as it can muffle the treble on voices.

Music and gaming audio is very much down to personal preference and taste but, for me, I’m a big fan of the Cloud Revolver’s sound stage. Admittedly I haven’t had my hands all that many headsets but what appeals to me is the clarity and overall in-game immersion that this headset brings. 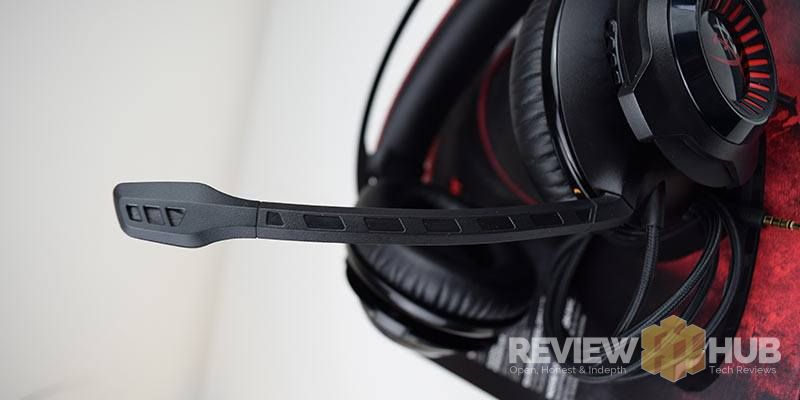 The microphone is detachable and adjustable via bending it towards your face. In practice, the mic is quite unwieldy and take a few tries to get it to stick. It also uses a standard 1.5mm jack so can be easily replaced or swapped out if needed. 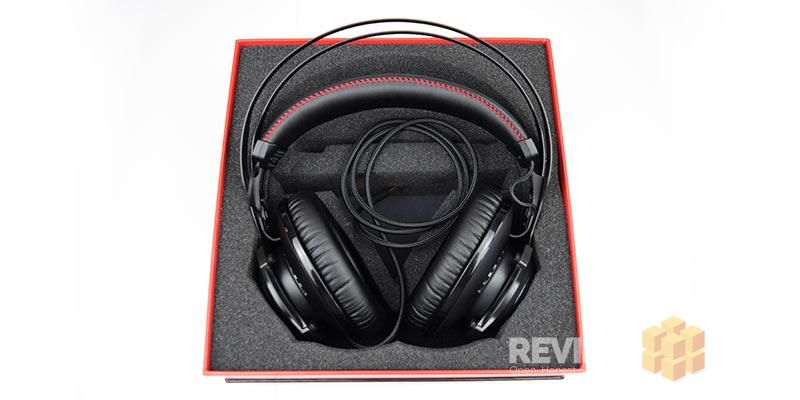 What’s in the epic box?

HyperX knows how to make great packaging. The cardboard is dense and premium with that almost air-tight seal making you work to get to your hard earned prize.

Surrounding the black box is a cardboard sleeve, teasing your tech mind with words like “Studio-Grade Soundstage” and “50mm Directional Drivers”. 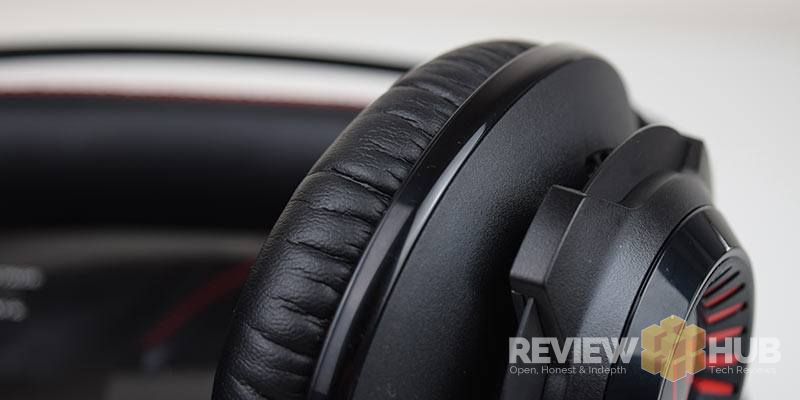 I’ve been using the Cloud Revolver headset daily for the last 2 months and can wholeheartedly say that I recommend this headset. It’s not cheap, and it does have its flaws (mainly the twangy headband) but when sat at a desktop or gaming laptop these flaws fade into the background.

Follow my instructions above and you too can custom tailor your headset to a perfect fit. If you want to play games in all their glory and gain the edge with clear 7.1 surround sound audio then definitely check out the HyperX Cloud Revolver Headset.