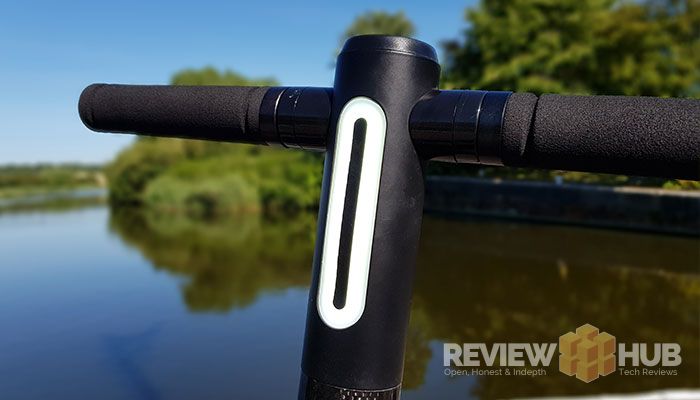 We get hands-on with ELE-GO’s Carbon Fibre Electric Scooter, and it’s Awesome!

Since you’ve landed on this ELE-GO scooter review, I’m betting that you’re looking to bag yourself your first electric scooter. It’s a daunting task, knowing what features to look for in such a new tech market.

My mission is that by the end of this review, you’ll know exactly whether the ELE-GO Electric Scooter is a good match, and if not you’ll be well on your way to having that perfect electric scooter checklist.

Don’t worry though, if you’re already a proud electric scooter owner and want to know whether the ELE-GO is a worthy upgrade? I’ll be covering everything you need to know as well.

Currently, in the electric scooter market, most models fit into two categories. Lightweight & portable options like the ELE-GO and heavier, bulkier scooters that offer smoother rides like the Xiaomi M365 & EUNI ES808.

So who’s the ELE-GO Electric Scooter the perfect match for?

Due to the compact and lightweight design, quick-release handlebars, carry bag and hard-tyre setup, the ELE-GO scooter is the perfect Urban Commuter!

All the components are hidden inside the front-tube making it very easy to grip & carry. Plus, weighing in at only 6.9KG it’s also light enough to hold one-handed. Compare that to the 13.2KG EUNI ES808, the 12.5KG Xiaomi M365, and it’s easy to see that ELE-GO electric scooter is a featherweight. 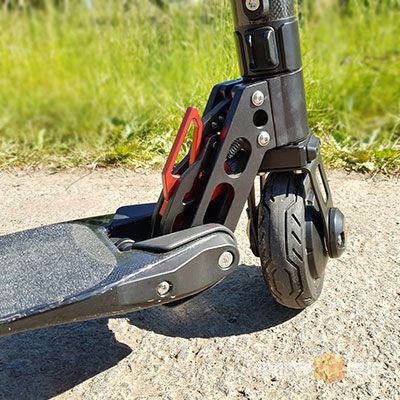 So let’s check out the Pros & Cons, before we go indepth looking at the Design, Build Quality, Ride Style, Features & Battery Life. 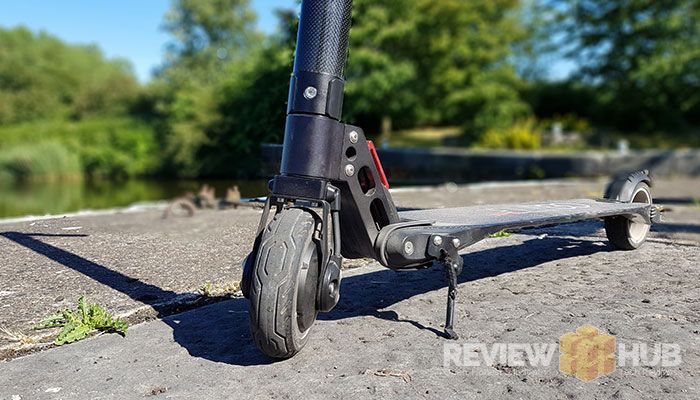 There’s no denying that the black version of the ELE-GO scooter looks awesome! It’s sleek, the carbon-fibre isn’t too garish, and overall it uses a nice blend of tech & minimalism.

It’s not as premium as my Xiaomi M365, but it makes up for this in multiple ways, the first being the lightweight design and the second being the compact-ability.

And then there’s the two coolest features of the ELE-GO scooter. The front-facing LED headlight and upwards facing dot display. This oval ring LED headlight doesn’t only look epic but easily lights up the path ahead when riding.

The LED dot display is slightly retro looking and matches the circular design. It doesn’t hold up very well in direct sunlight, but then again, most displays don’t.

The locking and release mechanism is simple, robust and uses an entirely metal build for durability. You pull the red clasp to fold and kick the red lever from behind to unfold.

Two areas that I feel could be improved are the kickstand and the acceleration buttons. The kickstand needs careful attention to make sure the scooter doesn’t fall over. It’s balanced a little too finely for my liking.

In regards to the acceleration buttons, I wish they were metal. While the design prevents them being damaged by a fall, I’m worried that they might get damaged during transport due to being made from plastic.

Overall though, it’s a nice looking electric scooter that easily handled the dirt tracks and jumps without showing any signs of weakness. I just wish my legs could say the same. 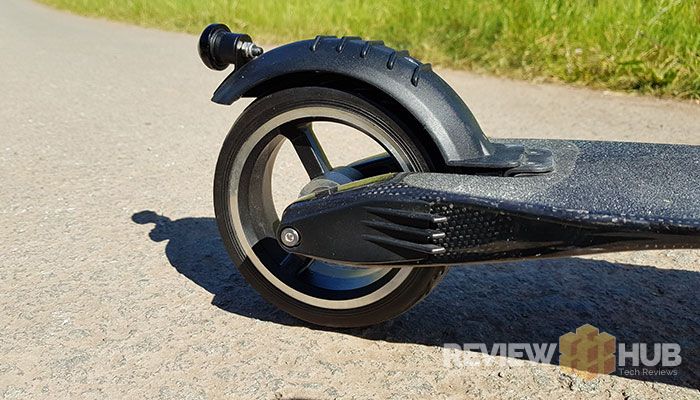 There’s no point in having an awesomely designed electric scooter if it’s boring to ride! Scooters are meant to be fun, so how’s the ride-a-bility on the ELE-GO Scooter?

Happy to say it’s super-fun. The front-wheel motor has a healthy amount of tug to get you excited and once you switch to the second gear, the real fun begins. While it can’t accelerate as hard as the Xiaomi M365, it left the recently tested EUNI ES808 in the dirt.

While most electric scooters top out at 20km, it’s how fast they get there that’s the fun bit.

Earlier I mentioned that the ELE-GO is the perfect Urban Commuter electric scooter. One of the main reasons for this is the rubber tyre setup. These tyres have the benefit of never going flat but negative of transferring all the vibrations into your legs.

When riding on rough terrain, it’s hard work for your legs when compared against an air tyre setup. But, if you’re mainly riding in smooth urban areas or commuting to and from work, the rubber tyres well suited and maintenance-free.

Did you just say 2nd gear?

Yes I did! You can switch between gears while riding using the red button just beneath the display. The first gear is more of an eco-mode or friend-mode (when you want to let your friend have a go without wrecking it!), that tops out at 15KM.

Gear 2 will take you all the way to 20km with much more acceleration. During testing, I spent around 90% of the time using Gear 2. Both gears work from a stand-still.

Braking… now braking on the ELE-GO isn’t as simple as other electric scooters I’ve tried. It’s a dual braking system that consists of engine braking combined with a rear fender brake.

I didn’t realise there was a rear fender brake until I was riding down a steep hill and the engine braking hit the event horizon… it just kept speeding up.

To be fair to the ELE-GO, the engine braking works well on the flat, allowing smooth controlled stopping. The rear brake is best for any declines or emergency stopping.

While the headlight can be easily activated using the red button, the brake light isn’t hardwired into the scooter. It’s a blinking LED light that you turn on manually before riding.

Overall, I enjoyed my time with the ELE-GO electric scooter. It has a fun amount of acceleration and you quickly get used to the slimmer profile. The rubber wheels, however, can leave you feeling fatigued on longer journeys.

Now that we’ve looked into the design & ride-a-bility, let’s talk portability. The ELE-GO is one of the lightest and most compact Electric scooters on the market.

The twist lock handlebar design means you can have them on & off in 15 seconds making the whole scooter store away easily.

Normally the biggest problem when storing your electric scooter is the handles bars. If you live in a city apartment like me, then having removable handles is epic. You can also store it upright, hang it against a wall or just tuck it away.

ELE-GO even included a carry case in the box! 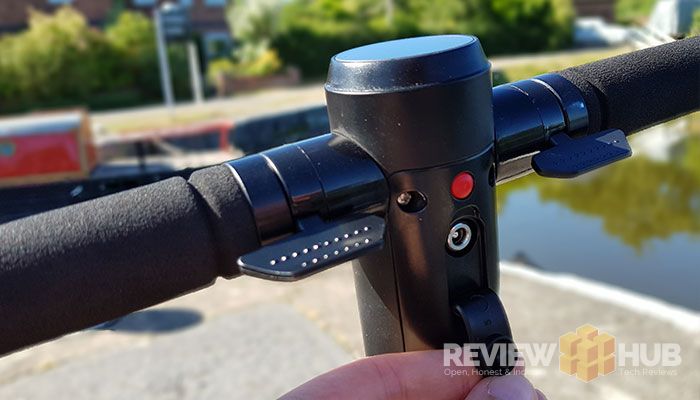 To charge the scooter, you’ll need to pull down the protective rubber insert just below the display and insert the included charger. You’ll see a red light when the ELE-GO is charging which will turn green once it’s complete. The whole process takes around 2 hours.

While there is no app to connect to the scooter and track journey times, I measured an 8km trip via GPS and had half of the battery left. This was mainly in gear two with plenty of off-road and hills.

On the flat, I can easily see the ELE-GO hitting the 20km it promises.

The ELE-GO scooter comes well packaged. I would have liked the whole scooter to have been wrapped in a clear bag as during transport some of the polystyrene packaging had rubbed against the foot grip.

Set up is super simple. Just twist on the handlebars, and you’re good to go. Also in the box is the included charger which is small and compact. 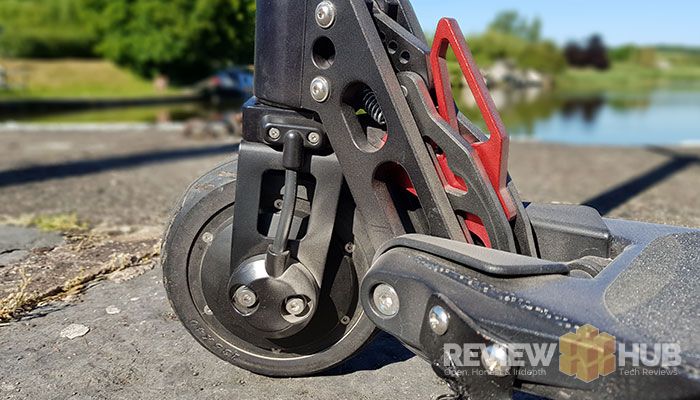 I’m a big fan of the ELE-GO electric scooter, living in a 2 bed apartment means I don’t have a garage or the storage for a larger scooter. With the folded design measuring just 15cm across you can store it pretty much anywhere.

It’s not just about storage though; the ELE-GO is an exciting ride that’ll quickly put a smile on any commuters face.

And that’s exactly who it has been perfect for, the urban commuter who needs a lightweight & reliable scooter that looks the part and stores away easily.

Has the ELE-GO Carbon Fibre Scooter tickled your tech buds? 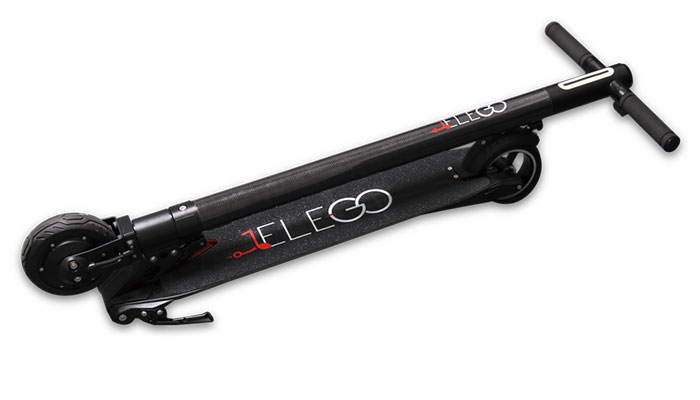