Struggling to get the perfect selfie? Arms not long enough to capture everyone in the shot?

Fear not, as now there’s a quadcopter for that! Pocket drones like the Eachine E52 will become your selfie assistant letting you cram all your friends into one epic group photo! But… is the quality of the camera good enough to make your newsfeed? Let’s find out…

Now if you’re like me… a complete novice when it comes to drones and quadcopters but want to get involved with this growing phenomenon, then you probably don’t want to jump straight in at the deep-end spending the big bucks on a model that you’ll crash in 20 seconds.

Well now you don’t have to as Eachine have made it their mission to create super affordable quadcopters and I was lucky enough to test out their Eachine E52 model.

Fancy yourself as a quadcopter pilot? Check out the latest deals below. 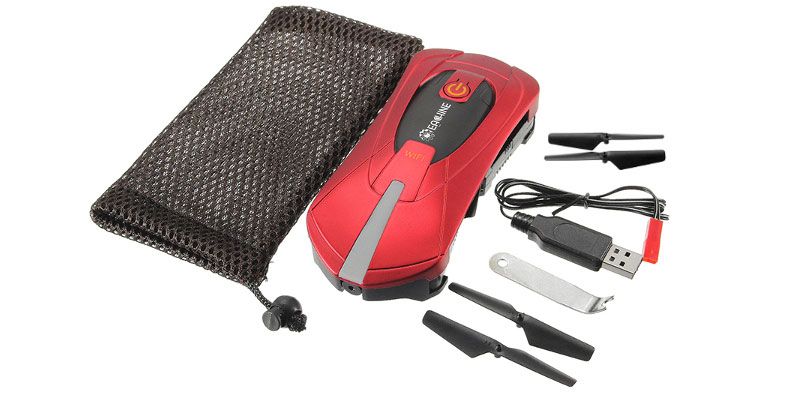 The first thing I noticed when unboxing the E52 quadcopter is how light it is at only 85 grams. The lighter the drone the longer the more flight time we’ll get from the removable 500mAh battery.

The build quality is good and they’ve used a flexible plastic which has a nice matte finish. It’s by no means premium, but at this price-range it doesn’t have to be. In terms of colour, you only have the one option which is red & Black.

Next, you’ll notice how small the Eachine E52 is, well deserving of its pocket drone status. It’s about the size of a mobile phone fitting into your pocket easily.

To set up the drone, you’ll need to pull out its four foldable arms and then attach the propellers. Charge (via USB) and then insert the removable battery unit into the E52 quadcopter.

Next you’ll need to download the app. Included in the box there are two manuals: one gives you diagrams of the controls, the other smaller manual is for the app and shows you how to set it up by scanning the barcode.

I stupidly went straight to the app store, searched Eachine and downloaded the wrong app and wasted loads of valuable flying time. The app you need is ‘JY UFO’. It supports both Android and IOS and is free to download. 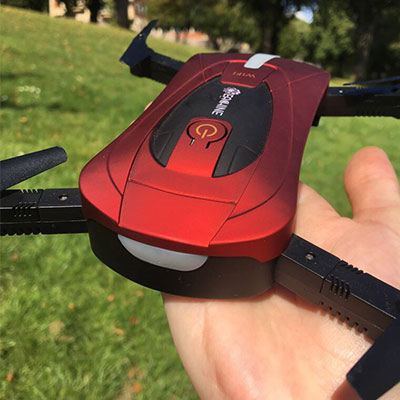 In order to use the camera and video function, you will need to connect to the WiFi signal given out by the drone. It should appear as WIFIUFO.

You can either use the included joypad or your smartphone to fly the drone. You will get more power with the joypad as the 2.4GHz signal is stronger than the WiFi from your phone.

One thing to remember is that you must turn on the drone first and then turn on the joypad, if you do it the wrong way around, it won’t start up.

The joypad is very lightweight making it feel cheap but it’s comfortable to hold. It uses spring back sticks and an array of different buttons to control the E52. Powering the joypad is 4 X AA batteries which you’ll need to purchase separately.

However, the joypad is noticeably larger than the drone and so not as portable – I can see why most people would likely ditch it in favour of just using their phone. 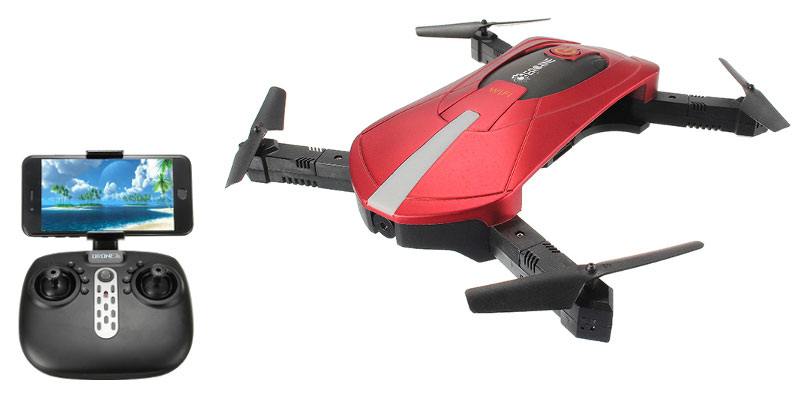 I took the Eachine out several times and initially it responded well with 6 – 8 minutes of flight time. It wasn’t the easiest to fly as my unity had a slight drift on it, meaning it requires constant corrections to keep it in the same place.

The drift got worse the more I used the Eachine E52, although you can recalibrate to correct the drift.

One issue I found after flying is that since the arms don’t click into place they’ll often get pushed in if you crash. This probably helps to protect the drone, but means you can’t start flying again after a crash.

The Eachine did seem to bounce back pretty well from crashes, although if you’re flying outside it’s worth taking the extra propellers with you. They tend to detach themselves and are lost easily.

The range on the E52 quadcopter is around 60 metres however the camera range is much shorter. If there’s no wind and you’re in a big enough open space away from trees and roads you shouldn’t have too many problems flying the Eachine, however as time went on the more and more less responsive the drone became and the less control I had over its whereabouts.

I’m not sure if this was the WIFI connection breaking down, the wind or one too many knocks which may have disconnected something inside… but… eventually the E52 became completely unresponsive and I went home from the park a bit disappointed, especially considering the flying conditions had been perfect.

There are lots of quite good functions with the joypad, you can override the annoying auto-land by holding both sticks down and pointing slightly inward, it can even flip, spinning 360 degrees on its side which looks very impressive.

There’s a one button return function which brings the drone back to the transmitter. Unfortunately, none of the buttons are labelled, so getting full functionality from the joypad is more a memory test than anything else.

If you’re a confident flyer you can increase the speed, although for us this just made the drone even harder to control. It seems the Eachine is a good drone for learning to fly and practising the basics, but would likely frustrate users who are accustomed to flying with a bit more control.

The camera is located on the front and is forward facing but can move slightly up and down so you can get the perfect angle for your pictures and video.

Picture and video quality is poor due to the onboard camera only having a 0.3mp lens. There’s a noticeable blurry delay on video but again for the price, you can’t expect anything more. Pictures and video save directly to your smartphones image library as there is no storage available on the E52.

If you’re after a small quadcopter to help you get to grips with the basics of flying, for the price range the Eachine E52 is a good option for you. It’s cheap, fun and ideal for light users.

But, if you’re planning on taking it on your travels in order to get the perfect selfie with your mates the camera quality is too low. It’s still fun though!

You can check out the Eachine E52 Tech Specs below.