You might be wondering… what the heck is the new 18:9 smartphone display ratio? Don’t Worry, Review Hub Explains All…

Every now and then I take a look at what the most popular searches on www.review-hub.co.uk are and the one that’s been popping up recently is… what is an 18:9 ratio smartphone screen?

It’s easy for someone like me (who spends all day immersed in tech) to forget that as new technologies emerge they often need a decent explanation to go with them. And more importantly, justification of the benefits to convince everyone that it’s a step in the right direction and will make your life easier.

With Samsung, Google, LG, Xiaomi & OnePlus (soon the 5T) all having flagship phones rocking the 18:9 ratio already, it’s likely to be a trend that sticks around replacing lots of the current 16:9 phones we see today.

So, with that in mind, in this article I’m going to try my best to explain the following… in the simplest way I can: 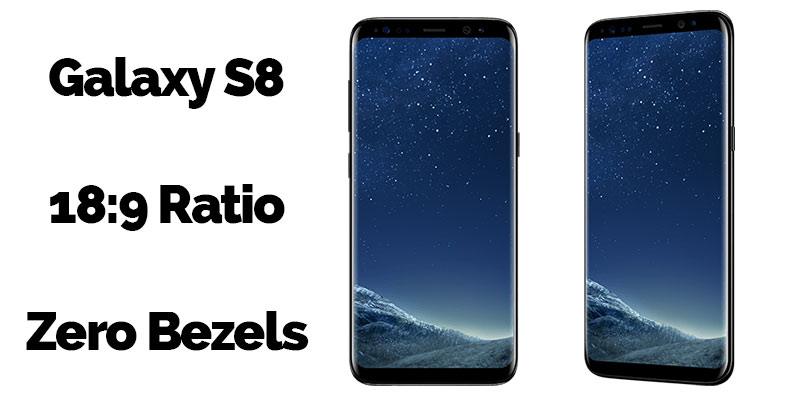 Why are smartphones using a new 18:9 ratio?

There are a few reasons why smartphone manufacturers have opted to switch to the new 18:9 ratio over the traditional smartphone ratio of 16:9.

While it makes sense for a TV to stick with the 16:9 ratio as the majority of video content is produced to horizontally, a lot of the content we consume on smartphones today is vertical. We’re now so used to scrolling on our smart devices that it’s become second nature.

The spanner in the works is that smartphones just keep getting bigger while our hands are staying the same size. Going any bigger than 5.5 inches on the a 16:9 ratio phone just makes it difficult to hold one-handed.

With the average phone size now being 5.5 inches, something had to change… actually two things. The first change has been gradual and is the size of the smartphone bezels, as they decreased it meant that the screens could get larger with the same width.

The next phase is to change the aspect ratio of the phone.

The best way to think of an 18:9 aspect ratio smartphone, is to imagine your current smartphone, then squash the sides a little so it becomes thinner and longer. Now you can grip it one handed while still having the same amount of display real-estate.

With the new thinner ratio, smartphones are able to push their display sizes even further. The Google Pixel 2 XL features a whopping 6 inch display but has a width only 1mm wider than the 5.5 inch Google Pixel 1 XL.

Hang on, won’t we end up with really long smartphones?

As technology in smartphones has advanced, not only have the display bezels been shrinking but the areas above and below the phones are disappearing as well. This means that the overall size of modern phones has stayed the same while the displays have become bigger.

Soon fingerprint readers will be hidden behind the display and we’ll be heading towards the ultimate goal of mobiles with 100% screen-to-body-ratios. The tri-bezelless trend is currently running strong.

What are the benefits of the new 18:9 ratio?

View More Content – Most apps and websites are viewed vertically on mobile devices. This means that an 18:9 ratio phone lets you see more of the content thanks to the extra height.

An Improved Form Factor – Since 18:9 ratio means more height and less width for the same screen size, it makes the phone a little more pocket friendly. Since your leg curves, the thinner ratio will won’t stretch your pocket as much and be comfier.

18:9 = 2:1 – When you break down the 18:9 ratio it becomes 2:1. This means that the height is double width creating two perfect squares ready-made for the oncoming of split-screen mobile productivity.

The Negatives of an 18:9 Ratio Display

For web browsing and vertical apps the 18:9 aspect ratio is an advantage but when watching videos you’ll soon realise that most of them are made for the 16:9 format.

This means that when watching 16:9 videos you’re going to end up with black bars at the sides of the screen or have to zoom in cutting off parts of the footage. Smartphones with OLED screens will hide this somewhat but on cheaper phones with LED displays the black bands are likely to be distracting.

Should your next smartphone choice be an 18:9 ratio mobile?

Do you have big hands or small hands, might be a better question to ask. If you can hold a 5.2 inch (16:9) smartphone easily in one hand, you’ll be able to easily hold a 5.7 inch (18:9) phone if the bezels are identical.

Put simply, you’re getting more display for the same width. Most modern phones are shrinking vertically as well, so it’s a win win!

So ask yourself how often you use your phone in landscape mode and if the answer isn’t very often you’ll love the new 18:9 ratio era of smartphones. If you spend your days watching videos, go check out the Galaxy S8 in-store first and see what you think.

Got any questions? Ask away in the comments below and I’ll be happy to help! : )