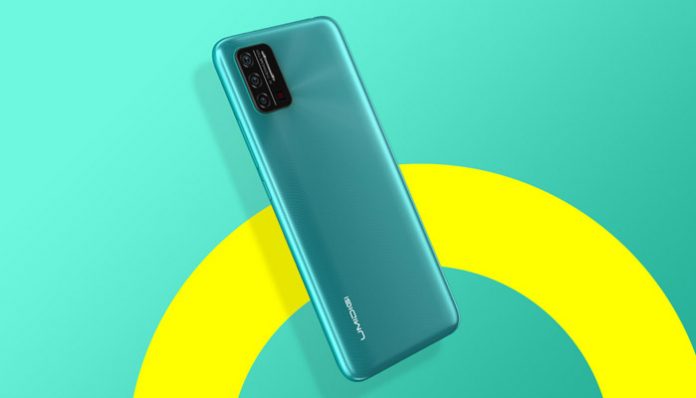 What a crazy world we live in! The latest super-budget phone from UMiDigi, the A7s, now comes with a built-in infrared temp checker for less than £100/$100.

Not the first to have this unique feature, it uses the same infrared sensor as the A9 Pro we reviewed at the end of last year. It also keeps the same size 6.53″ display and large 4150mAh battery but downgrades the resolution, camera & processor to reach that $80 sweet spot.

In this full in-depth review of the UMiDigi A7S, we’re going to find out whether the A9’s little brother has what it takes to earn a place in your pocket!

But first, here’s a quick look at the pros and cons. 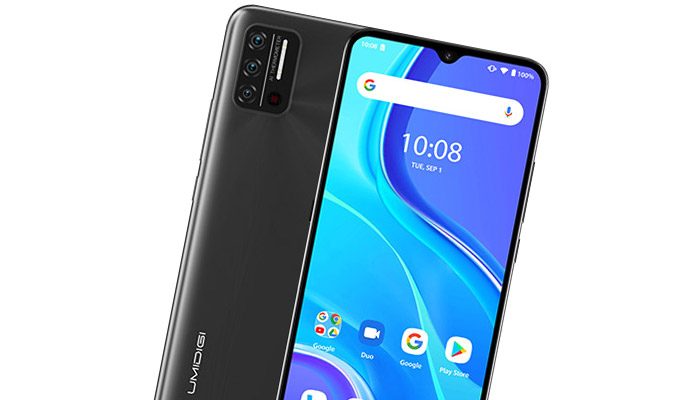 The UMiDigi A7S has one of the best displays I have seen on an $80 smartphone. You get a 6.53” IPS LCD panel coupled with HD+ resolution when many manufacturers don’t even bother to go over 480p.

With thin bezels, a slight chin, and a teardrop notch at the top, you get an immersive viewing experience. I only wish that the colours were a bit punchier – then it would’ve been an excellent media-centric smartphone.

That being said, the images are considerably sharp and crisp owing to its 269 PPI (Pixels per Inch). You’ll only notice pixelation if you’ve got a better quality display to compare it to.

The screen also gets very bright, albeit not enough to be legible under direct sunlight. But that’s okay for me as I’ve gotten used to my hermit lifestyle. 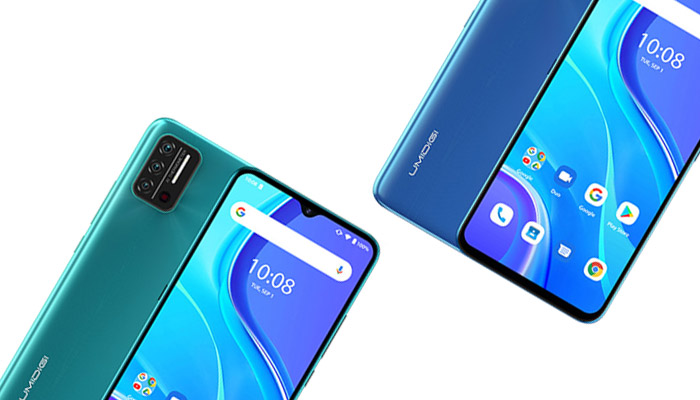 Similar to all other phones at this price point, the UMiDigi A7S dons a polycarbonate shell. However, instead of the unibody design, I would have preferred if the back panel was removable. That way, you can access and swap out the battery, if and when necessary.

Another small issue I have with this phone is that it’s unnecessarily big. I see no reason for it to weigh 195g or be 9.45mm thick. Maybe it’s lazy engineering, or perhaps the phone is trying to overcompensate for its entry-level internals. Who knows?

Now jokes aside, the curved edges do allow for a secure grip. And if you can manoeuvre other 6.5” phones single-handedly, then you won’t strain to use this one either. 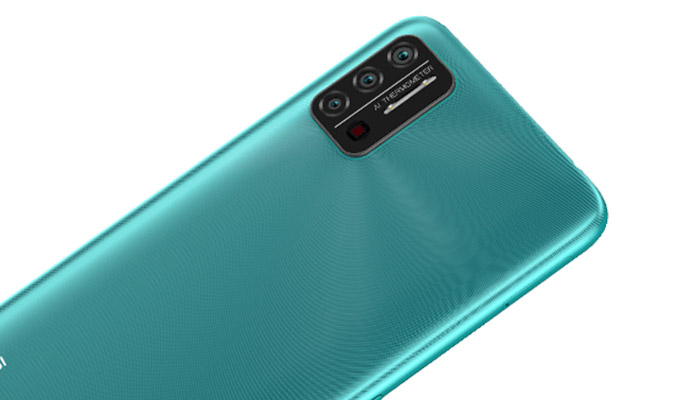 The camera module on the UMiDigi A7S has four cutouts. Three of these are for the cameras. Whereas the fourth one is for the IR Thermometer – more on that in a later section.

For the primary camera, we have a 13MP snapper which is paired with an 8MP ultrawide and a 2MP depth sensors. The image quality is good enough considering the price point, and certainly usable for scanning documents.

On the front, you get an 8MP selfie camera which lowered my self-confidence as soon as I turned it on. So I would suggest not to use it – like ever!

In terms of video recording, you’ll be able to shoot HD 720p videos at 30fps with the main camera. The front camera caps out at 480p @30fps.

As you’d expect, the quality isn’t great, and I won’t recommend using it if you’ve got other options available.

To hit such a low price point, the UMiDigi A7S comes with 2GB RAM, 32GB storage, and the MediaTek MT6737 SoC – an entry-level processor that’s currently more than 4 years old.

And you’re right. It can’t! This is why the UMiDigi A7S uses Android 10 GO – a lightweight version of Android specifically designed by Google for entry-level smartphones.

This combination gets you through casual workloads like browsing social media, using WhatsApp, and streaming YouTube. However, it’ll test your patience with occasional UI stutters and apps taking over a second to load.

In terms of gaming, it’s possible to play hyper-casual titles like Subway Surfer without any issue. But as soon as you go to slightly intensive titles like Alto’s Odyssey, the drastic frame-drops and overall lag make it unplayable. 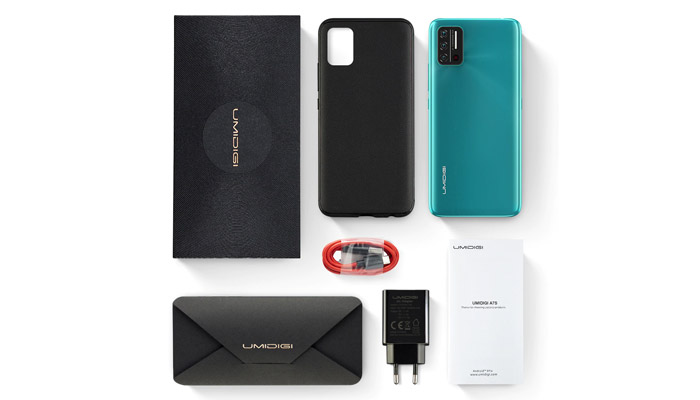 The UMiDigi A7S houses a 4150mAh battery that delivers 4-5 hours of screen-on-time. Now, I do feel a bit disappointed with the results, especially when considering that it’s powering basic entry-level hardware.

But that being said, there’s nothing much to do on the phone anyway. So if you’re just occasionally checking your social media feeds, making some calls, and streaming a few YouTube videos, then the UMiDigi A7S easily gets you through a full workday. 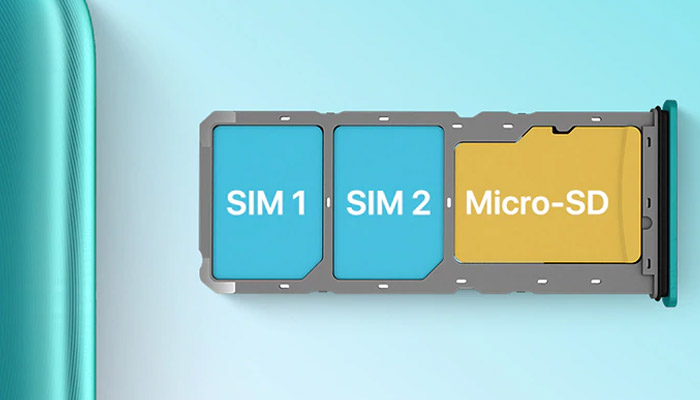 Despite the budget price tag, the UMiDigi A7S doesn’t compromise when it comes to sensors and connectivity.

You get true dual-SIM support with two slots for your 4G nano-SIM cards + a dedicated slot for up to 128GB MicroSD expansion. Call quality is also excellent, and I never faced issues regarding call drops or poor network coverage.

Other than this, you get last generation’s dual-band WiFi (2.4G | 5G) and Bluetooth 4.0, which is acceptable given the price point. However, I am delighted to see that UMiDigi didn’t cut back on the USB Type-C port and our beloved 3.5mm headphone jack just to save a few bucks.

Coming to the sensors, you’ve got the complete ensemble with a Proximity Sensor, Ambient Light Sensor, Accelerometer, Compass, Gyroscope, and a non-contact Infrared Thermometer – which deserves it’s own dedicated section. 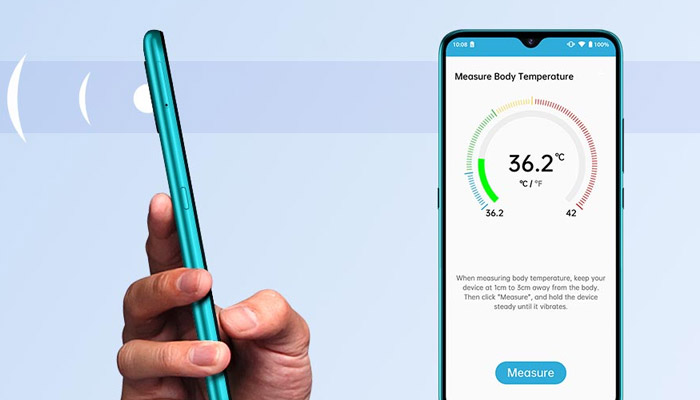 IR Thermometer – An Unnecessary Gimmick or A Useful Feature?

Similar to what we saw on the UMiDigi A9 Pro, the IR Thermometer is not intended to substitute a medical apparatus.

The main issue is that the readings are slightly off and tend to showcase lower temperatures. Now, there’s a feature inside the app for calibrating the sensor to get an accurate reading, but it doesn’t help.

Also, note that you need to place the scanner at least 1-3cm away from the person’s forehead to scan their temperature. So there goes social distancing out the window!

As such, for me at least, the IR Thermometer is nothing more than a gimmick, and something I will rarely use.

But what I will use is the dedicated button intended to trigger the scanner. Thankfully, UMiDigi made it customizable. You can assign up to 3 actions corresponding to a single click, double click, and long press. Now, this is what I call a useful feature!

Okay, so there’s something in common between the iPhone 12 and the UMiDigi A7S. Both phones ditch the fingerprint reader in favour of “face unlock.”

But sadly, UMiDigi’s solution is extremely insecure. I was able to get the phone unlocked by showing it a picture of my face. So yeah – you should better set up a pin or pattern to lock this phone, and keep the AI Face Unlock turned off. 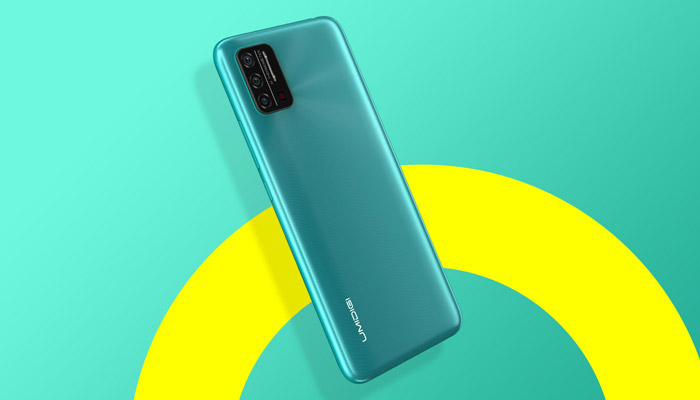 Instead of the non-contact IR thermometer, I believe UMiDigi should have positioned the A7S as a budget smartphone for digital detoxing.

Hear me out! For $80, you get a phone that handles all the necessary stuff like making calls, setting alarms, listening to music, using maps, and even calling an Uber.

However, it won’t let you waste time playing games. If you don’t quit, it’ll hang and crash, until it quits on its own. And although you’ll be able to open social media, the sporadic UI lags and stutters will prevent you from using it for too long.

You see what I mean? The perfect phone for digital detoxing!

It also serves as a great secondary device which you can use as a backup for those emergency situations.

Do we recommend UMiDigi A7S? Yeah, but mostly as a secondary phone. Or maybe for your grandparents who need a large screen dumbphone for their ageing eyesight.